Cattle of Geryon 1 oz Silver The 12 Labors of Hercules 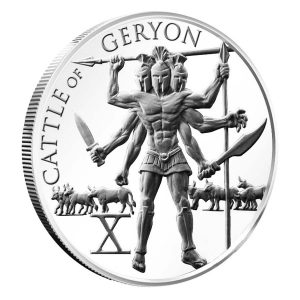 Hercules’ 10th labor was one of his most difficult; he was tasked by King Eurystheus to travel to the island of Erytheia to seize the Cattle of Geryon. The scorching temperatures during his trek through the desert frustrated Hercules so much he shot an arrow at the sun. Helios, the sun god, recognized his efforts and gave the Greek demigod a golden chariot to ease his journey.

Upon arrival to Erytheia, a two-headed dog and a herdsman attacked Hercules, but a single strike with his wooden club disposed of each. Geryon, a monster with three helmets, three spears and six arms, heard the ruckus and charged at Hercules. Using one of his poisoned arrows, Hercules shot with such power that it penetrated Geryon’s helmet and killed the beast.

The cattle were rounded up and herded back to Eurystheus, but not without trouble. Some cattle were stolen, and others scattered after Hera sent a gadfly (a tormenting insect) to bite and aggravate the cattle. Hercules rounded up the herd within the year, but Hera flooded a river to further delay the demigod. Hercules countered by piling rocks to make the river more shallow so the cattle could cross. Finally, when Hercules delivered the cattle to Eurystheus, the King sacrificed the animals to Hera.

Geryon, the brute giant, is featured on the obverse of each 1 oz silver round. He is clutching two spears and two swords in his six muscular arms while wearing three helmets. His cattle roam in the background. “CATTLE OF GERYON” and “X” are inscribed.

The reverse of this 1 oz silver round carries a portrait of Hercules. The Nemean Lion’s skin is draped over his head as armor, and he holds his wooden club in his right hand. The inscription reads “1 oz CMXCIX FINE SILVER.”