Apples of Hesperides 1 oz Silver The 12 Labors of Hercu 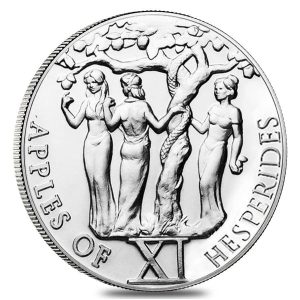 The Apples of Hesperides 1 oz Silver Round, the 11th design in the exclusive 12 Labors of Hercules Series, consists of one troy ounce of .999 Fine Silver, and was manufactured at the ISO9001 certified Provident Mint. Each of these fine Silver Bullion pieces was manufactured with the highest metal purity and production quality standards, and is qualified for a precious metals IRA.

Hercules was originally tasked with 10 labors, but King Eurystheus gave him two additional tasks after discounting the Hydra and Augean Stables tasks because he did not complete them alone. The first additional labor for Hercules was to retrieve golden apples from the garden of the Hesperides, a mission Eurystheus thought to be impossible.

But to the Greek demi-god, nothing was impossible. Hercules traveled around the world until he came across Nereus, the sea-god capable of shape-shifting. Hercules took Nereus captive until he divulged the location of the garden. Hercules fought Antaeus and Busiris – and in some stories Poseidon – before finally arriving to the garden. The Hesperides, daughters of Atlas the titan of strength, and the serpent Ladon, protected the apples.

Atlas agreed to get the golden apples while Hercules held the celestial sphere on his shoulders, but when Atlas returned, he told Hercules he was not interested in taking the heavens back, and would instead take the apples to Eurystheus. Hercules knew that if Atlas delivered the apples, then the task would be void. Consequently, Hercules asked Atlas to relieve him for a short time, and when Atlas agreed, Hercules tricked him and took the apples.

Some believe that Hercules had to defeat Ladon before escaping with the apples.

The obverse of this 1 oz silver round shows the Hesperides standing under the apple tree in stunning detail. Ladon can be seen wrapped around the trunk and branches of the tree. “XI” and “APPLES OF HESPERIDES” are inscribed.

The common reverse of the 12 Labors of Hercules series shows Hercules with his head bowed, wearing the impenetrable skin of the Nemean Lion as armor. The reverse is inscribed with the round’s weight and purity.