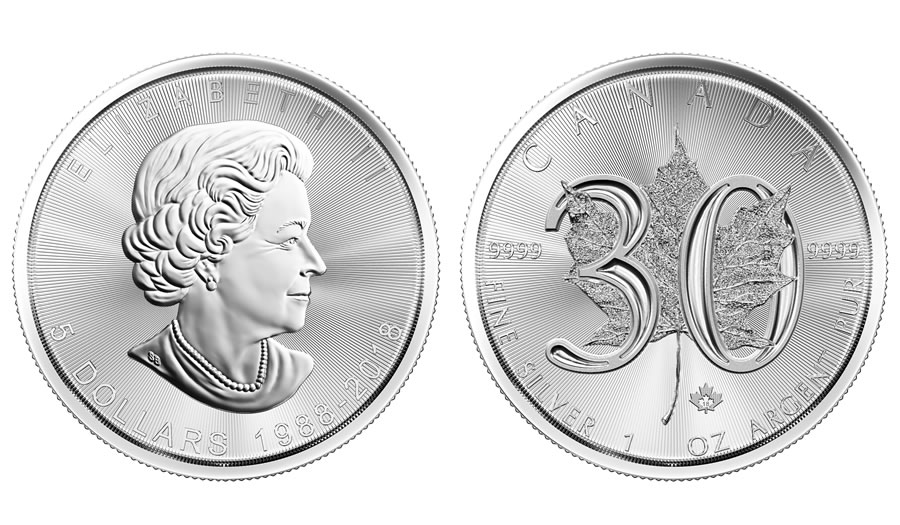 30th anniversary issue of the Canadian Silver Maple Leaf!
Contains 1 Troy oz of .9999 pure silver in BU condition.
Bears a face value of $5 (CAD) backed by the federal government of Canada.
Limited Mintage of 250,000.
Obverse includes the image of Queen Elizabeth II.
Reverse features the sugar maple leaf with “30” ringed around the leaf to mark three decades of issue.
Bears the new MINTSHIELD Technology of the Royal Canadian Mint!
Sugar maple leaf design from Walter Ott.
Each of the 2018 1 oz 30th Anniversary Canadian Silver Maple Leaf Coins in this product listing are in BU condition. Coins in this condition exhibit none of the typical indications of wear and tear. However, BU coins can possess minor fl ranging from breaks in the luster and spotted surfaces to contact marks as a result of the coining process. The new MINTSHIELD Technology from the RCM is an invisible application on the surface of its 2018-dated Silver Maple Leaf bullion coins. This breakthrough science in coining allows RCM silver bullion to successfully resist “white spots” during production, packaging, and storage to protect the intrinsic value of the coinage.

2018 marks the 30th anniversary of the Canadian Silver Maple Leaf coin program. Introduced nearly a decade after its gold counterpart, the Silver Maple Leaf was notable upon release as the first silver bullion coin with .9999 content. Today, many other bullion programs follow that lead with the issuance of coins in .9999 pure silver.

The design of the sugar maple leaf on the reverse of these coins comes from Walter Ott, and has been in use since 1979 when the Gold Maple Leaf coins debuted. These latest issues feature radial lines in the background on both sides, as well as the micro-engraved maple leaf privy with the Royal Canadian Mint’s Bullion DNA program on the reverse.

On the obverse of all Canadian Silver Maple Leaf coins is the image of Queen Elizabeth II. An effigy of Her Majesty appears on all Canadian coinage, with this fourth-generation design created in 2003 by Susanna Blunt. Blunt was just the 2nd Canadian artist to design the Queen’s portrait for coinage in Canada.

The reverse of the 2018 1 oz 30th Anniversary Canadian Silver Maple Leaf coin bears the sugar maple leaf in the center, with special text honoring the 30th anniversary. Hung around the outer portions of the maple leaf are a “3” and “0” to mark this tremendous milestone in the program’s history.