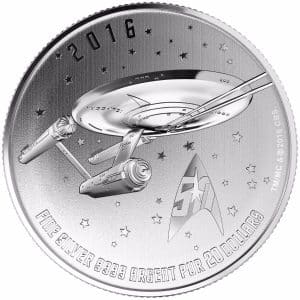 Coin Highlights:
Mintage restricted to a total of 300,000 coins!
From the Royal Canadian Mint’s $20 for $20 Series.
Ships in a clear, vinyl pouch with a certificate booklet.
Contains .25 troy oz of .9999 pure silver.
Face value of $20 (CAD) is fully supported by Canada’s government.
Features a unique specimen finish.
Reverse depicts the USS Enterprise.
Obverse features the right-profile portrait of Queen Elizabeth II.
In the Star Trek universe, there was one constant across the various series that evolved over time: the U.S.S. Enterprise. This was the central starship in the fleet of the United Federation of Planets.
Roddenberry’s original television series only lasted for three seasons, but after reruns developed a significant cult following on TV, the Star Trek universe expanded significantly. Over time, there have been a total of seven television series and 13 feature films.
On the reverse face of each 2016 $20 Canadian Silver Star Trek Enterprise Coin you’ll find the image of the U.S.S. Enterprise as it fires its phaser blasters. The Star Trek logo is visible on this face, along with an engraving within the logo marking the 50th anniversary of Star Trek. Engravings include the year of issue, metal content, purity, and face value of the coin.
The obverse bears the familiar right-profile portrait of Queen Elizabeth II. Each coin has a specimen finish, which is similar to a proof production. These coins are shipped with a certificate booklet that verifies the authenticity of your purchase.
The Royal Canadian Mint was founded in 1908 as a wing of the Royal Mint from London. Today it is the sovereign facility of the Canadian government and includes facilities in Ottawa and Winnipeg.