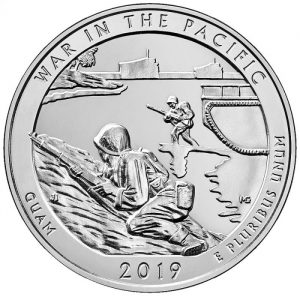 America the Beautiful (ATB) Quarters capture the breathtaking beauty of America’s wild landscapes that sweep the nation from sea to shining sea. Today, several of these treasured sites are celebrated through the U.S. Mint America the Beautiful Quarters Program. The completed program will contain 56 new coins, each with a unique reverse representing a site of national interest from a different state, the District of Columbia, or one the five US territories.

Exquisitely struck in 5 ounces of .999 silver, the 2019 War in the Pacific coin is the third of five 2019-dated releases and is the 48th issue in the America the Beautiful coin program. Guam’s War in the Pacific National Historical Park commemorates the bravery, courage, and sacrifice of those participating in the Pacific Theater campaigns during World War II. It was established as a memorial not only for the U.S. and its allies such as Great Britain and Australia, but also for the opposing forces of Japan.The American liberation of Guam and the Mariana Islands accelerated the end of the War, but came at a price of 1,777 American lives and 18,337 out of 20,000 Japanese soldiers charged with holding the island.

The obverse features the same portrait of George Washington that is seen on the obverse of all US quarters. The portrait is surrounded by the inscriptions of “UNITED STATES OF AMERICA”, “LIBERTY”, “IN GOD WE TRUST”, and “QUARTER DOLLAR”.

Reverse
The reverse depicts two U.S. soldiers coming ashore at Asan Bay, prepared to fight for Guam’s liberation. One crawls on his stomach in the foreground with his gun raised. A second is shown wading towards the beach. In the background are ships, palm trees and a tracked landing vehicle. Inscriptions include “WAR IN THE PACIFIC,” “GUAM,” “2019,” and “E PLURIBUS UNUM.”