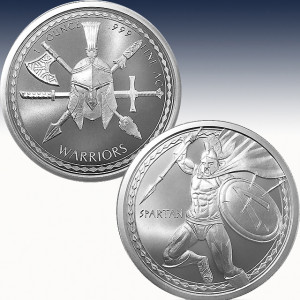 Some of the most powerful civilizations on earth owe their existence to the bravery of their fierce warriors. The Warrior Series of 1 oz silver and copper rounds honor some of these legendary fighters throughout history.

The first release in this exciting 6-design series celebrates the Spartan Warrior, one of the most formidable soldiers in the ancient world. Fighting drills began for the Spartan Warrior as early as age 6, and for the rest of his life, it was said that the only time he took a break from military training was during a war. Throughout the ancient world, the word "spartan" became a symbol of fearlessness, harsh discipline, and elite fighting skills.


Obverse
The obverse of the 1 oz Silver Spartan Warrior round features a fully-armed Spartan soldier. With shield and spear raised, he is poised in mid-strike on the front lines of the battlefield. The Greek letter lambda, a well-known Spartan symbol, is engraved on his iconic shield. The word “SPARTAN” is inscribed next to the warrior’s image.


Reverse
The reverse depicts a Spartan soldier’s corinthian helmet with the horsehair crest; symbolic of an officer. It rests in front of the traditional Spartan weapons of warfare: The signature Dory spear, the Xiphos (a short sword), and a battle axe. “1 ounce .999 fine Ag” and “WARRIORS” are inscribed around the image.