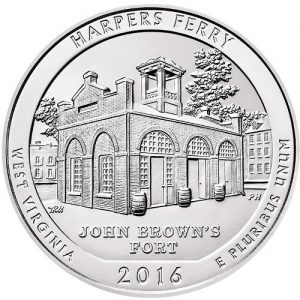 The 2016 Harper’s Ferry National Historical Park 5 oz Silver ATB is the third release from the US Mint in the 2016 collection of the America the Beautiful 5 oz silver coins. Each silver coins consists of five troy ounces of .999 fine silver, and is manufactured at the US Mint’s West Point facility. Because the US Mint employs ISO9001 manufacturing standards, and because these coins are backed by the United States government, each qualifies to be included in a self-directed precious metals IRA.

The America the Beautiful Coin Series features some of the United States’ National Parks, Forests, and Memorials. The US Mint began releasing the 5 oz silver ATBs in 2010, and will conclude in 2021. Five designs are released each year, and are minted for a finite time, limiting the mintage of each design. Because these coins are manufactured using strict standards, consist of investment grade silver, and have limited mintage, the America the Beautiful coins are a wise addition to any silver bullion collection.

John Brown’s Fort is the site of John Brown’s last stand during an ill-fated insurrection by abolitionists to liberate local black slaves. The fort housed to the local armory, and was captured by John Brown and his small force of whites and run-away guerrilla slaves. John Brown’s plan depended on the support of local slaves, and ultimately failed when none joined the ranks of the insurrection.

The obverse of the Harpers Ferry features the right facing profile of George Washington, and the inscriptions “UNITED STATES OF AMERICA”, “QUARTER DOLLAR”, “LIBERTY”, and “IN GOD WE TRUST”.