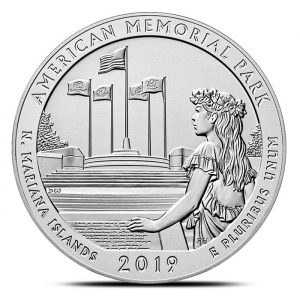 America the Beautiful (ATB) Quarters capture the breathtaking beauty of America’s wild landscapes that sweep the nation from sea to shining sea. Today, several of these treasured sites are celebrated through the U.S. Mint America the Beautiful Quarters Program. The completed program will contain 56 new coins, each with a unique reverse representing a site of national interest from a different state, the District of Columbia, or one the five US territories.

Exquisitely struck in 5 ounces of .999 silver, the 2019 American Memorial Park at Mariana Islands coin is the second of five 2019-dated releases and is the 47th coin in the America the Beautiful coin program. American Memorial Park is located on the Northern Mariana Islands; one of five U.S. territories. The Park was created to honor the service and sacrifice of American soldiers and local Saipan residents who fought together to repel Japanese forces during World War II’s Marianas Campaign.The American liberation of the Mariana Islands helped hasten the end of the War, but came at a price of over 5,204 American military and local islanders’ lives.

The obverse features the same portrait of George Washington that is seen on the obverse of all US quarters. The portrait is surrounded by the inscriptions “UNITED STATES OF AMERICA”, “LIBERTY”, “IN GOD WE TRUST”, and “QUARTER DOLLAR”.

Reverse
The reverse features a young Chamorro woman in traditional dress at the front of the Flag Circle and Court of Honor. She rests her hand on the plaque honoring the sacrifice of those who died in the liberation of Saipan. The American flag is displayed in the center of the Flag Circle at the Court of Honor and is surrounded by the Navy, Marine Corps, Army, and Coast Guard flags. Inscriptions are “AMERICAN MEMORIAL PARK,” “N. MARIANA ISLANDS,” “2019,” and “E PLURIBUS UNUM.”