Cerberus 1 oz Copper Round | The 12 Labors of Hercules 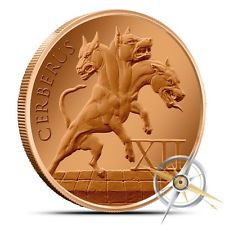 Cerberus, the three-headed dog that guards the passage to the Underworld, is features on the obverse of this 1 oz Copper Round. Each head can be seen growling and displaying its sharp teeth; its body lifted on its hind legs, ready to attack. “XII” and “CERBERUS” are inscribed around the design.

After completing his 11th labor, Hercules was given a final labor that would release him from King Eurystheus’ rule. The king sent him to capture Cerberus, a powerful three-headed beast with razor-sharp teeth. The hound protected the gates of the underworld – or the “realm of the dead” in many mythologies. Hercules enlisted help and learned the ways of the Underworld in an effort to escape with his life during the impending battle.

While traversing the realm, Hercules encountered Hades, god of the underworld. Hercules requested Cerberus be brought to him, and Hades agreed on the condition that the Greek demi-god could apprehend the monster using only his bare hands. Hercules subdued the hound using his strength, slung it over his shoulders, and carried it back to Eurystheus who freed Hercules once he returned Cerberus to the Underworld.

A stoic portrait of Hercules, which can be viewed on each round in the 12 Labors of Hercules Series, shows the hero with his head slightly bowed. He wears the Nemean Lion’s impenetrable skin on his head as armor, and holds his wooden club in his right hand. The copper round’s weight and metal purity are inscribed.